Day Swappers is a unique affiliate program for Era Swap community members to earn reward for exchanging services in day to day life as service providers or service seekers and increasing the user-base on multiple platforms of the ecosystem.

Era Swap is an educational initiative by KMPARDS, an organization seeding Era Swap. Era Swap is an E-learning platform for students & community of Ecosystem. There are multiple courseware’s which are specially designed to provide exposure to the community on next gen Technologies like Blockchain, Artificial Intelligence (AI) & Machine Learning (ML), Internet of Things (IoT) and many more.

BuzCafe is a convenience solution offered to Era Swap Ecosystem users. It is a marketplace where users can buy and sell services in a Peer to Peer mode by meeting up. Further, it is also a network of retail outlets which provides exclusive deals for Era Swap community.

Time Swappers is a peer to peer marketplace that enables buyers and sellers to exchange services in form of tokenize time (ES/hour). ES will be utilized for the exchange of services and availing discounts.

BetDeEx is a decentralized Prediction Platform where users can predict and win. BetDeEx leverages blockchain to make the overall prediction process Decentralized, Transparent, and Trustless. BetDeEx applies a minor platform handling fuel of 2% from users which will be collected in TFC.

Era Swap understands that to power the distributed community platform, there needs to be a solid and secure payment network. For this purpose, Era Swap has developed a decentralized wallet that supports multiple digital assets and is highly secured.

TimeAlly is a Decentralized App (DApp) which is based on pre-defined set of rules through Smart Contracts to offers multiple benefits to users, govern the generation & distribution of ES Newly released Token. TimeAlly increase Era Swap count for TimeAlly contract holders for holding tokens over a period of time.

Kunjimudra Express (KMX) is a blockchain powered peer to peer exchange solution for digital assets for users adding convenience and ease of access through both web and mobile application globally. KMX will be live soon for users.

Swappers Wall is a social networking platform on Time Swappers platform that promotes and facilitates interaction between friends, family, peers and colleagues with smart contract based reward system for everyone to earn Era Swap token as rewards. The goal of Swappers Wall is to connect & reward users and the community through their stories, posts, videos or photos, etc.

TimeAlly Club offers exclusive Cards for its members which enable users to convert digital assets and withdraw from prescibed ATMs with real time accessibility and convenience, while adhering to the highest level of security standards. 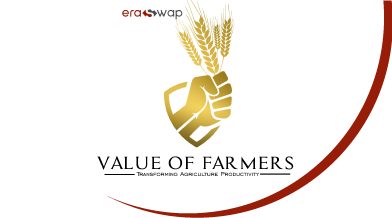 Value of Farmers (VOF) is a platform focused to bridge the gap between End User and Farmer in a Peer to Peer mode by offering solutions under one roof. VoF offers mobile app based solution which is easy to use, user-friendly and utilizes emerging futuristic technologies like blockchain, Artificial Intelligence and Machine Learning.

Why Era Swap project was conceptualized?
The journey of Era Swap began with research from the KMPARDS team, the core team behind the formation of the Era Swap token and it's ecosystem. The team determined that the current community at large needs a middle-man-free, transparent ecosystem where they can get paid directly without sharing their hard-earned income with any third party.

Have any queries? We’re always here to help!
Please fill the Query Form below that will help us answer your query promptly!